10 Jokes you need to stop telling

Jokes.  Humorous stories that end with a punch line.  A punch line is the final phrase that makes the whole situation funny.  Without it, the joke is just a story that doesn't really end, it just sits there.  Another form of joke is known as the 'one liner'.  This is a single comment about a situation that is funny on it's own.  Usually just an observation about something, a well executed one liner is a question of being clever and having good timing.  Done properly, a one liner looks much easier than it is.  At your given office/workplace there is someone there that is the unofficial funny guy.  The one that everyone expects to hear something funny from.  If you don't know who that person is, either you are it or you don't get around much and you get a lot of work done.  In which case, good for you.  So this is a list of the types of jokes that really don't need to be told anymore.  They are so overplayed that they don't really get much more than a wry chuckle.

- not PC jokes - The politically Incorrect Joke.  When I was a kid, I remember hearing my first Pollock joke.  by Pollock I mean to say a stupid or oblivious person, not someone from Poland.  For a long time as a child I thought that was what the word meant.  It was synonymous with stupid.  That became politically incorrect and rightly so.  Then they replaced that joke with the 'blonde' joke which for some reason was even more oblivious and quite a bit more stupid.  Not quite as offensive as the Nationality Joke but still offensive if you were a blonde and not particularly bright.  Mostly because blondes had an anecdotal history of acting stupid to get what they want.  Now if you want to tell a joke about someone stupid you don't need to set it up with a label because we're pretty much all stupid.  The reason beyond the obvious that you need to stop telling these jokes is because they have been told for ages and are recycled through different stereotypes the jokes themselves haven't changed and are not that funny anyway. 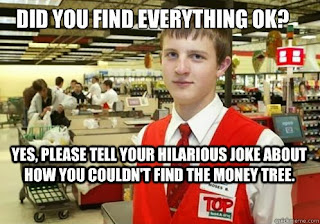 - Job jokes -  These are jokes based on your job.  The classic would be the following:

Checker:  Did you find everything ok?

Painfully smart customer:  Why? were you hiding something?

This is of course not limited to checker jobs.
Call center service rep for Bank/Service/Anything:  Is there anything else we can do for you today?
Mensa customer:  Sure, could you add 100k to my account?
ha ha ha.

Cleverly calling accountants 'bean counters'  doesn't even register as a joke anymore.  Every profession has their distinctive elements and those elements are only too well known to the person working them.  Your observations about their job are not only not unique, but are at best slightly annoying. 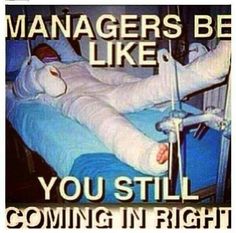 - Job jokes part 2 - These are different job jokes,  they are the ones where the manager wryly makes a joke about everyone having enough 'on their plate'.  Usually couched in irony a manager will say something like 'I'm sure nobody has anything to do before the weekend, so I wanted to give you this to chew on'.  This isn't even met with a laugh, it's his way of telling you that he hasn't been able to do his job and you are going to pay the price.  his job being managing the flow of work to the employees.  It's no joke.

- Twin jokes - These jokes are only available when you meet someone you find out is a twin.  You will be tempted to break out the 'evil' twin joke.  'Which one is the evil one?'  or 'Do you ever switch dates?' sure it seems a fertile ground for levity, it's more of a painful groundhog day where every time someone finds out you are a twin you become 1/2 a person and now must bear hearing about a show someone saw, or the little fact about child actors often being twins because they can't work as long as adult actors.  Just stop.

- tax jokes -  I have been just as guilty of these jokes every year as anyone.  I don't think people should stop telling them.  I think they should stop thinking they are jokes.  The observations that the Government spends money without thought or wisdom is all too real.  The reason we tell these jokes is because we feel we have nothing else we can do.  We are helpless and so we make a joke as a gesture of surrender. 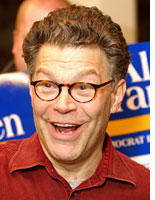 - political jokes - Not the jokes told by us about the other party (in America anyway), these are specifically jokes by politicians.  They are usually told during campaigns, but can be told during press briefings and other events as well.  Here is the problem, do you want to elect a comedian?  Probably not.  Some people are naturally good joke tellers or even comedic observers.  If they are, that's fine.  If they are a stiff bought-out party shill, they are not going to be good at telling a joke, so there is really no point.  It hurts to listen to someone who doesn't have a good sense of timing tell a joke. 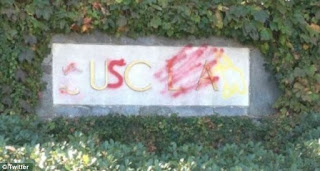 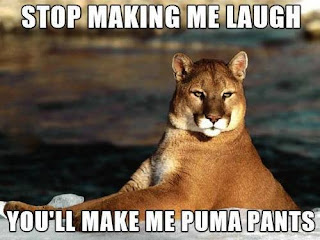 - puns - Not jokes, just a play on words.  The interesting part is in other languages, puns don't really work out very well.  People don't appreciate them.  In another language I purposely used to the word that indicates an animal eating to describe myself eating but trying to imply that I was so hungry I would eat like an animal.  I was told I was using the wrong word.  Some people go on pun riffs and thats fine, but I've found the conservation of energy around a pun does not allow it to ever be funny.  That is, the energy used to create or use a pun outweighs the laughter energy created by it.  I will say that puns incorporated with a picture furthering the joke does get a lot more mileage for the pun and may be a rebirth of the art form the visual part moves it up a notch. 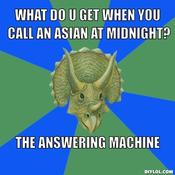 - automated response jokes - Primarily set in the phone answering machine or call screening service, you are calling someone and a voice will ask you please state your name.  Smartly nearly everyone will say 'me'.  Ha, wow.  that's is not only funny, but will probably cause you to have to call again because the person on the other side won't respond to 'me'.  Still very funny.  I'm still laughing.  I remember the days before caller ID when you were anonymous until announced and people would say 'Guess who' .  That was usually a good way to get hung up on. 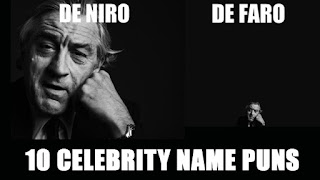 - Name jokes - The classic.  Lets take the case of Wright, my own name.  I know and have known EVERY joke that concerns that name since I was 8.   There is not a joke you could tell me about Wrong, Left, Mister, or Always that I haven't heard more times than should be socially acceptable.  Accentuated during my dating years every so often it still will trigger some 'clever' response to which I am obliged to laugh politely.  I then usually say something like 'I remember the first time I heard that one.  I think I was at recess at school'  I should stop saying that as well.

Honestly, there are plenty of ways to tell funny jokes without using these tired subjects.  If you can't find any; that might be a signal that you probably shouldn't tell jokes.  I for one will probably still use all of them because I need all of the humorous crutches I can find.  But the rest of you?  no.  don't do it.