Yum breakfast. Who doesn't like the sound of crackling bacon and eggs. The pop of toast out of the toaster, the fresh squeezed OJ, a short stack of flapjacks or french toast. Yeah, right. You get this breakfast on very few occasions. Most breakfasts are based on the good old American breakfast cereal. Whole grain presweetened goodness. Over the course of my lifetime I've had several favorite breakfast cereals. They have all been good and they have all had a spot on my pantry shelf. This top ten like my others only counts to ten because then I know where to stop not because I am ranking them by any preferential means. There are so many in fact that i'm thinking of making this a 2 part-er because the other cereals I'm leaving out are really just as important. We'll see how this one takes. 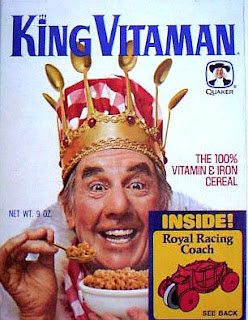 King vitamin makes the list for me because I sent away for a King vitamin magic kit. It looked like it would be really cool. That 4-6 weeks that you need for anything to be sent to you is really more of a guideline than anything else. If you don't know King Vitamin, he's a clever guy at first he was a real actor in a white and purple furry mantle and crown. Then he changed into a goofy cartoon character. His cereal tastes like every other golden grain cereal out there, which tastes like Captain Crunch. 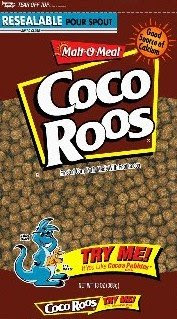 coco for coco-puffs? The devil you say. The fine people at Malt-O-Meal got it right. Sell twice as much cereal in large bags with goofy nondescript mascots and a LOT cheaper than the Post/GeneralMills/Kellogg/Quaker folks and you'll have yourself a winner. Coco Roos was one of these winners. Lots more chocolaty goodness and sugar than it's card board clad counterpart, Coco Roos had many repeat appearances in my breakfast bowl before I moved on. It was good and cheap and good (yes I did mention good twice). The milk at the end was every bit as chocolaty as the milk at the resolution of the coco-puffs, but I didn't have to pay for that miserable sonny and his coo coo antics. Runners up in this department would be Count Chocula as well as Chocolate Donutz 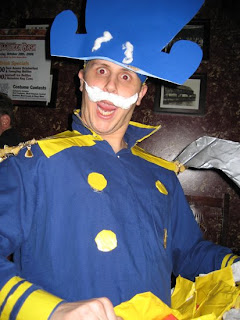 All crunchberrys. I remember getting a box or two of Captain Crunch with crunchberry and once it was opened it was more like having a bowl of regular Captain Crunch. Because someone (me or my brother) started picking all of those luscious crunch berries out of the cereal. ARRRRR! So to alleviate the sibling desire to eat all the crunchberries Quaker came out with a crunch berry only cereal to RAVE reviews (at least mine anyway). It was an answer to our epicurean prayers. All Crunch Berries All the time...YUM! Before I leave the Cap'n, let me bow to his other flavors. Peanut butter crunch, Lafoote Cinnamon crunch among others. There are an amazing amount of variants in the crunch world. 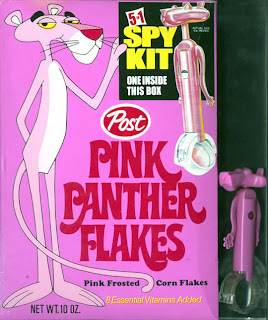 My first sugared cereal. And sugared it WAS! But this cereal had a few tricks up it's sleeves. Once you sloshed the milk on this first of firsts, you really only had about 2 minutes to eat the cereal or the flakes would become wallpaper paste. If you left a few errant flakes to dry on the edge of the cereal bowl when you were done, it would take a blasting crew to remove that organic super glue. But it was great because not only was it a great cereal, but it has one of the most memorable mascots in cereal history. Tony the Tiger. 'They're GREAT' he would say and rightly so. People ate them so much that the boxes for them started getting bigger and bigger until finally you would often mistake them for the box of Borax bleach it was standing next to (20 mule team). There were many knock offs of Frosted Flakes. My own favorite was the strawberry flavored Pink Panther flakes. Just the same as the frosted flakes, but made of pink frosting. I remember a vicious rumor that circulated around that the red in pink panther flakes would make lab rats blind. I still loved the pink panther flakes, but they only lasted a year. Ahh, pink panther...we hardly knew ye. 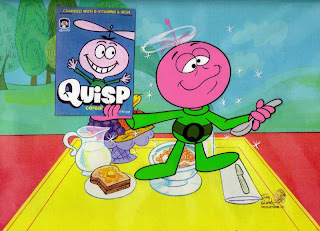 No, the cereal wasn't really that great, it tasted like bowl shaped Captain crunch, or king vitamin or any number of golden spun honey flavored cereals. It was great because of it's mascot! What a great guy! that little quisp dude was my first exposure to aliens and I found that I liked them. Quisp also had some great prizes that were all UFO themed. Mostly little mini frisbees that I believe were later converted to Pringles can lids, but still it was other worldly. In fact, I'm not all together convinced that quisp wasn't aliens trying to gauge a response to their presence...hmmm. 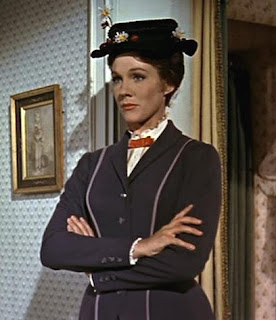 What a weird cereal. Shredded wheat had been around for ever as one of the first breakfast cereals. These large pillows of shredded wheat that you would break up in milk and chow down on. Lots of crunch and nearly no flavor, so it MUST be good for you. So how do we get the kids to eat this stuff? Force em? nah, Like Mary Poppins said, Just a spoon full of sugar, or in this case, a bowlful of sugar helps the shredded wheat go down. This cereal had several different frosting options in it's heyday. Regular, cinnamon, or strawberry. Regular or strawberry was really my favorites. 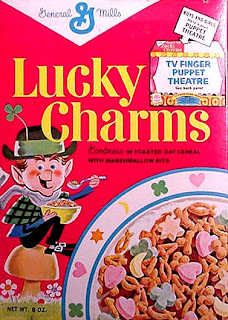 This is the ONLY cereal that I know of that continually got upgraded with new marshmallow shapes as the cereal matured. Pink Hearts, yellow moons, orange stars and green clovers! it went on like this for over 10 years but in 1975 the interloper blue diamonds were introduced to lucky's irresistible temptation to the masses. Once they saw the bump in sales, they would buy a new extrusion die for the cereals every few years (between 10 and 4) consisting of purple horseshoes, red balloons, rainbows, pots o gold, leprechaun hats, shooting stars and hour glasses. I LOVED the little marshmallows but hated the actual cereal. I would pick out the marshmallows on a more frequent basis than I did the crunch berries. Mom stopped buying this one because we would end up with a 1/4 box of sweetened cat food. That's right, Cat food. Look at it, without those little tasty bits of puff sugar, the regular cereal part consisted of what looked like sugared kibble. It tasted like sugar glazed Cheereo's. Cheereo's will not make my list. I can't stand Cheereo's, it tastes fair initially, but those burpeeo's that you get about 1/2 hour later are VILE. 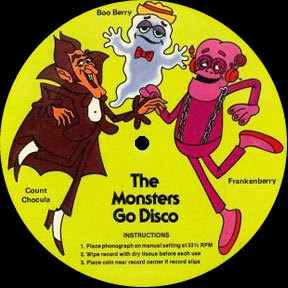 These all get a nod because they were all kind of fun in their own way. It was the first time that a series of cereals would be basically the same but capitalize on different characters. Count Chocula, Franken Berry (my favorite), Boo Berry, Fruit Brute which was the ostensibly gay were wolf, and the yummy mummy, also fruit flavored but covered in ace bandages. Pick your favorite monster, they all had the now signature General Mills marshmallows in them and they were all fun in their own way. If you were to close your eyes, and eat them. the fruity ones and lucky charms were virtually indistinguishable. The specific fruit ones of course had their own flavor and Count Chocula was the coolest of the characters with the Boo berry ghost running a close second unless you really like Peter Lorrie in which case he was first. The characters were so popular that they spawned all kinds of other kinck knacks that you could buy. They even went disco, but then again, who didn't? 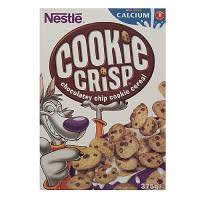 This was an altogether forgettable cereal except in one department. This was the first time that cereal manufacturers dropped all pretense that cereal was at all good for you and nothing more than a morning sugar rush. I mean really... selling you little cookies that you put in milk? They were making fun of themselves at best. Of course since then there are many other cereals that drop all pretense of being healthy Golden Grahms, Cinimon Toast Crunch, French Toast crunch among others. I'm sure Golden Grahms are supposed to be healthy or something, but still, if you're just eating grahm crackers is that really that good for you? I have no idea. 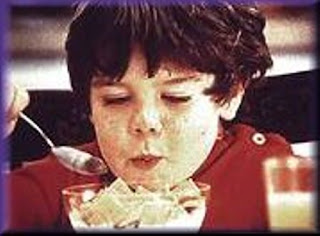 This cereal was first just little cereal squares. Nothing special. But the commercial was one of those cultural moments that doesn't quit. Possibly the most successful cereal commercial to date. Later on we got Cinnamon Life and it was good, Raisin Life was for raisin lovers and then we got the best flavor of all, Maple and Brown sugar life. I liked the vanilla yogurt life too. But all of these are really Life cereal dressed up. The original still deserves the kudos.

I'm still pretty sure that If I were a bachelor, I would probably spend most meals eating cereal and soy milk. Yeah, you heard me, soy milk. Vanilla to be exact. It is AWESOME with cereal. Before you yak, give it a try. It's worth the experiment.

See ya in a fortnight! Thanks for stopping by!
Posted by Macotar at 8:38 AM

As soon as I saw King Vitamin, I thought of that magic kit -- which as I recall I was not allowed to sully with my gaze, not to mention touch. I liked the way Quisp would stick to my tongue if I ate it in the correct orientation. And, of course, after a LIFEtime of Mikey jokes, who could resist?

WOW....this is a great one. Sure brought back memories....differenbt from yours since my youthful cereal eating took place in the late 40's. I don't so much remember the cereals, but I remember getting a Lone Ranger mask and Ranger badge. I got a Gene Autry something and a Mark Trail, Trailways map....those were the days.......now....Lucky Charms has a death grip on me!!!

I'm glad you mentioned the Monster Cereals. Those are a staple around the house at Halloween time. (But I also buy them off season if I can get them!)

I finally understand the generation gap. It's related to sugar. Having grown up on oatmeal, cream-o-wheat, and wheaties; I never enjoyed presugared carbodipped carbs until my kids insisted on them. Perhaps the variety of the new brain foods were the inspiration for a generation of techno geeks. And I still like shredded wheat. No wonder Dave and Shelly don't remember the cereals.