10 problems with technology in entertainment.

TV and movies are great.  They entertain us with stories and adventures to brighten our dreary day.  Entertainment often runs afoul of technology when it comes to story lines.  In fact nearly any technical representation of real life has elements that were not true at the time, or not true ever.  But we all know that the real world just isn't as exciting without that movie magic! 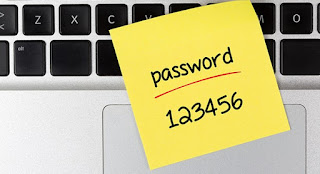 -  Passwords take more than 3 attempts and 5 minutes - This happens ALL the time.  Team X may be good or bad guys but they need an expert computer hacker.  What is that for?  Breaking those silly passwords into Team Y's computers.  The scene usually starts with dumbfounded members of Team X stare at a computer terminal blinking greenly at them and call for the hacker.  The hacker assumes a position on the computer terminal and starts typing quickly, 'DAMN' they will say after the first try, 'This is really strong security'. Team X leader, 'But you can hack it right?' Hacker with some smugness will say something clever and vaguely technical indicating their disappointment in the leaders lack of faith.  2 - 5 more password tries the triumphant cry 'We're in' and that's the last time you will see the hacker until it's time for them to get shot.  Bottom line.  Passwords are as hard as you make them, but even the most simple of passwords leading into a computer system not only has to have the right password, but often needs to originate from the right location.  It's not a question of skill, it's a question of knowing the password.  A good rule of thumb is to have passwords 9 characters long or longer that only make sense to you.  A better rule is to use a password manager that you have the password to that has all of your other passwords.  Then use a password that is much longer and just a favorite sentence or catchphrase.  It doesn't really  need to be tricky, it really needs to be LONG.  A favorite password I used for a while was 'A short time ago in a galaxy nearby' 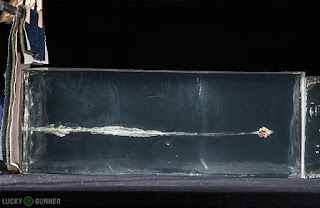 -  PEW PEW PEW! - One of the oldest tv/movie tech problems.  In the movies, anything that blocks light will block bullets.  Do not believe this in the unlikely event that you find yourself in the middle of a fire fight.  Bullets can go through an amazing array of things so just because you are hiding behind that barrel, it may not protect you at all.  Best to stay out of fire fights. 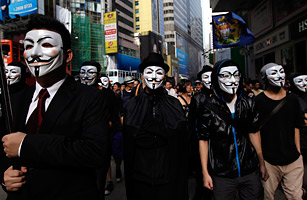 -  Hackers all dress quirky - I'm not sure what this is all about.  Hackers (which according to TV is used interchangeably with computer professionals) apparently must dress like they are going to comic con every day.  The most accurate portrayal of a hacker in TV or movies was probably Mathew Broderic in War Games.  How did he dress?  Tshirt and Jeans.  Wow.  that totally blows my mind!  it's so out there!  Wild!  For some reason since that movie hackers are required to dress either like they are cosplaying a character from revenge of the nerds, or in clothes are are classically unwashed with the last weeks meals standing in evidence. 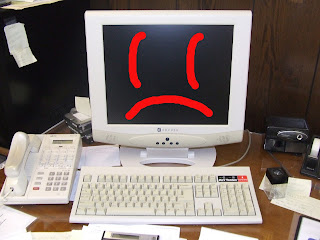 - Computers do not have feelings - Yes yes, I know people are trying really hard to approximate emotion in computer.  In fact there are whole movies on the subject.  Here is the problem.  Emotions don't do us any favors. Some say they are the crossroads between our higher brain function and our most primal instincts. In fact, we make some of our worst decisions under the influence of emotions.   As a result a computer would not feel empathy, nor would they feel any of the host of emotions attributed to them.  So the computer that suddenly does the 'right' thing based on their sudden empathy for the good guys (terminator, i'm looking at you here) doesn't seem to make much sense.  Why would you program a computer with genuine feelings when you know that makes them unpredictable?  Because otherwise the movie doesn't work.

-  The Cure's on the way! - When you have been infected with some kind of pathogen and you are the hero, there is a cure out there usually in the form of an untested antidote or vaccine.  This cure will probably immediately change you from a vampire bent on the destruction of your loved ones back to who you were.  No side effects, no problems, happy ending.  Of course we all know that there is not much that you can count on in the world of medicine because the nature of human beings is much broader than the answers medicine gives us.  This is why every commercial for the next wonder drug has a longer list explaining possible side effects than the list explaining the fantastic benefits. 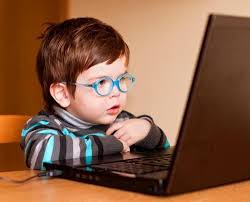 -  Is there anything Kids don't know? - The operating system is the language that allows the different elements of the computer to integrate and talk to you.  It's how you can tell the computer what to do.  In Jurassic park a young girl exclaims 'This is Unix!  I know this!' and then proceeds to 'fly' through a graphic representation of internals of the computer system in order to help the group with her supposed hacker skills.  Everyone knows that she wasn't really a hacker because she was dressed pretty normally.  Of course she was still in grade school, so maybe you don't have to dress that way until you make computers your career.  The point is this.  Unix (great grandad of Linux and Mac) was not the sort of thing you have in school, or at home, or nearly anywhere.  It was not graphical by nature (like MacOS or Windows) and it is not friendly.  Why does this matter?  Because one of the rules of the movies is that if there are kids and adults in a room where there are computers.  The kids MUST be better at computers than any adult in the room.  Because it's cute, and it's how computers make some of us feel, like we are slow and old. 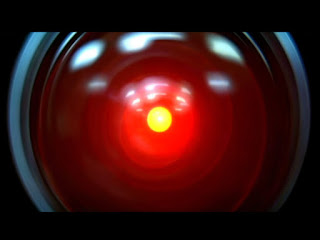 -  Computers that think are either evil or stupid - Some of you may quote short circuit.  Those were not computers those were animation models for Wall-e.  If there is a computer that is sitting there thinking by itself eventually it will say something like 'Wow, this world would would be a LOT better without people messing it up'  Then it would start curing of the world.  Otherwise computers that live with humans tend to be like really dumb people that are always not quite in on the joke.  They still hang around and do things in their funny way because they aren't evil. 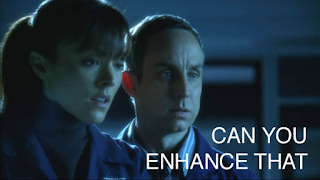 -  Zoom...Enhance - All you need to identify a vehicle or a person or anything in surveillance video is to grab a frame of that video and say 'enhance that'.  The computer then zooms in and creates an HD picture of what you need instantly.  It's easy.  Except of course that you can only enhance things so much.  You ever listen to an audio recording that has been cleaned too much?  It sounds watery and strange and most importantly, not accurate.  Same with pictures.  Of course our good friends at the NSA are trying very had to make enhancement software that can do what we are talking about, but honestly it's only as good as the data available on the picture.  If you have a cheap 7-11 video camera picking up things, you are not going to be able to turn that into an Ansel Adams. 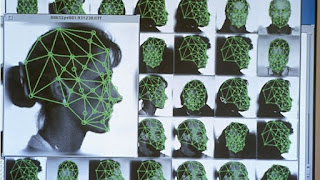 -  The Government has better technology than we do - They WISH!  We often think of the Government with a capital G.  Big Brother.  Everything wrapped into one big all seeing eye.  In the movies they have space age virtual reality with a cherry on top.  The truth is while we see it that way, the actual government departments often do not communicate with each other and do not make available tricks and tips they they have that might be handy to other departments.  The NSA may have some great hacking tips, but they aren't going to give them to the CIA.  Also, often the technology available to the regular citizenry is every bit what the government has and might be a bit more?  How?  Because it takes Government institutions a LONG time to institute new ANYTHING!  Doesn't mean they aren't still full of tech and constantly wanting more, but they aren't as all put together as they would have you believe.

-  Computers alternatively boot instantly or take hours -  Looking for a plot complication?  Computer Reboot!  This age old answer to every question is terrific for adding enough time to make something more intense.  'We can't get out until the computer has rebooted and authenticated our exit point!'  When it's a part of the plot, the computer booting takes an excruciating amount of time.  When it would be in the way of the plot moving, the computer usually reboots within seconds of initiation.  I think this is the technological equivalent of 'A watched pot never boils'.

Gimme a couple of weeks, we'll find something else to talk about.
Posted by Macotar at 7:36 AM

Pretty nice post. I have in fact enjoyed reading your website posts. I have been googling blogs and sites in related manner recently and i have to state you have a nice
Pass Box manufacturers

Thanks to both of you! I didn't see the comments come up when I reset my machine so there they sat for a long time.